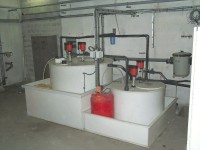 In a first tank, a disinfectant buffer solution (base) is injected to ensure the disinfection of the effluent as it arrives. After the contact time has been allowed, the disinfected effluents are transferred, by a lift pump, to a second tank.

In this tank, a pH test is performed, followed by the proportional injection of a neutralizing agent (acid). Mixing is put into action and another pH check is run before an authorization is given to release the effluent into the drain network.

Ruling of 16 July 2007 establishing technical prevention measures, in particular, confinement, to be set up in research, teaching, analysis, anatomy and pathological cytology laboratories, autopsy rooms and industrial and agricultural facilities where the workers are liable to be exposed to pathogenic biological agents.

You can upload our datasheets 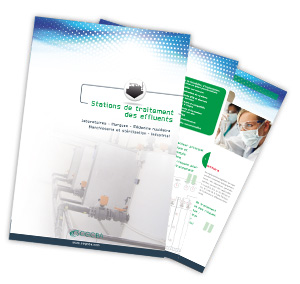 To limit the risks due to pathogenic infection and burns in the domestic water networks of facilities open to the public, the regulations stipulate that:

The water temperature in the networks must be greater than 50°C at all times.

The water temperature at the terminal points must be less than 50°C.

Surveillance of legionnaire's disease once every year.

Brands of the group